With the popularity of the LS engines and the shear power Chevy was able to get out of those engines, Ford needed to come up with an engine that could compete if not beat the LS based engines. Ford engineers worked hard to replace the old 4.6L modular V8 found in the Mustang since the mid 90s. Ford was able to come up with a 5.0L engine that was packed with engineering advancements and dubbed it the Coyote.

The Coyote engine features 4V DOHC heads with Ford’s Twin Independent Variable Cam Timing (Ti-VCT). Of course as muscle cars go, no one ever wants to leave good enough alone, we want to get everything we possibly can from an engine. With the popularity of the Ford Coyote engine comes a huge selection of aftermarket performance parts. How best to take care of the engine management then a proper standalone system. Enter the AEM Infinity Series 7 EMS.

When you pair an AEM Infinity 708 (30-7101) EMS to the AEM Infinity Series 7 Plug and Play Adapter Harness for the Ford Coyote engine using the Ford Racing Control Pack (30-3812) you’ll have a plug and play solution for a motorsports level engine management system. *Note* This adapter harness will only work for manual transmission vehicles and is for racing engines which are using the OEM Ford Coyote engines using the Ford Racing Control Pack

The Infinity ECU for the Ford Coyote engine has been used successfully in racing since its release a year ago, including on JPC Racing’s 2x record-setting Coyote Turbo drag car that set a new record after switching to the Infinity its first time out. It delivers complete tuning control including Ti-VCT variable cam timing (four cams), Drive-by-Wire (plug included on harness for quick integration of the Ford Drive-by-Wire pedal assembly), dual on-board Lambda AFR control, dual knock control and speed density fueling to eliminate the MAF. A base map is available for the Coyote for quick start up.

AEM recommends the purchase of its Infinity Auxiliary Sub Harness (PN 30-3510-00) for easy installation of the MAP and AIT. This sub harness connects to a connector with a High Performance DTM-Style 12-pin connector for adding common aftermarket sensors including fuel pressure, oil pressure, boost control solenoid and ethanol content. The expansion port also includes a sensor ground, 5v reference, power from relay and high side output for activating a solenoid, and switched inputs for auxiliary radiator fan, boost target and no-lift shift.

The 30-3813 Coyote wiring harness includes a connector to enable control of the Ford Racing Boss 302 Alternator Kit (Ford PN M-8600-M50BALT). Users who do not have this alternator may need to purchase it for proper connection.

The Drive-by Wire pedal assembly is not included with the 30-3813 Coyote wiring harness. For Drive-by-Wire integration the Ford pedal assembly (Ford PN BR3Z-95836-D) is required.

THE BENEFITS OF CONTROLLING FORD’S TiVCT WITH INFINITY

The Infinity ECU was the first programmable EFI system to deliver programmable variable cam timing (VCT) for the Ford Coyote TiVCT system. By controlling the Coyote’s VCT on all four camshafts, tuners are able to create more peak power over no VCT or when tuning only intake variable cam tuning, and significantly more mid range. The following dyno plots were performed on a stock Ford Coyote engine, on the engine dyno at CPR in Gardena, CA, where tuning the intake and exhaust VCT netted a peak gain of 42.3 HP @ 6500 RPM and a mid range gain of 109.3 Horsepower @ 3900 RPM. The Coyote’s torque gains are even more pronounced, showing a peak gain of 85.8 lbs/ft at 4,400 RPM, with the largest torque gain of 149.9 lbs/ft occurring at 3,700 RPM. 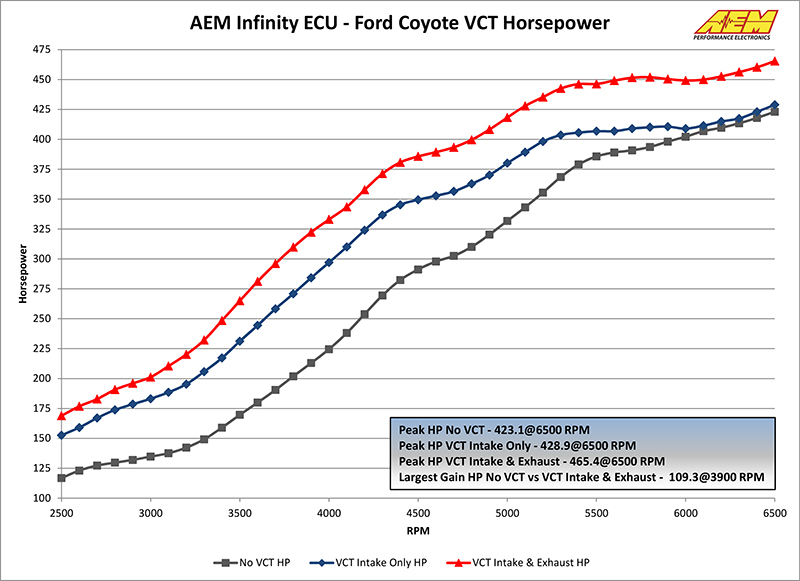 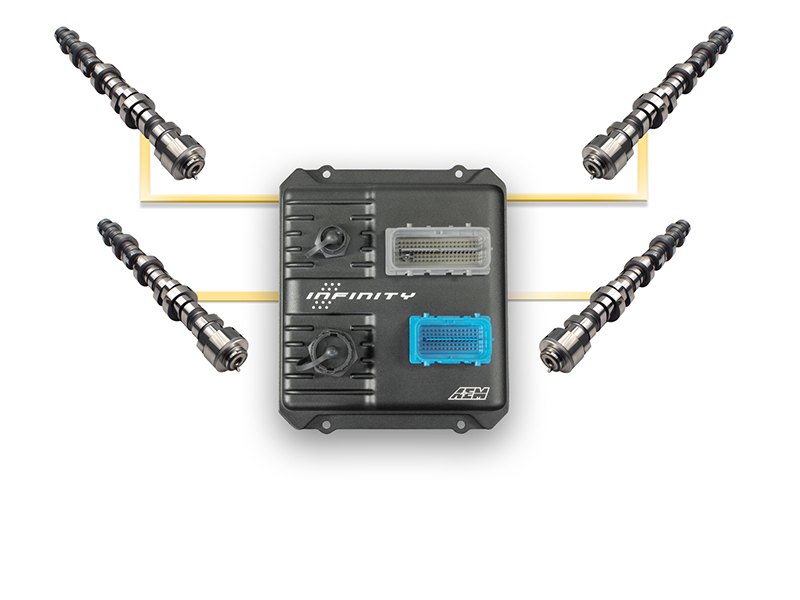 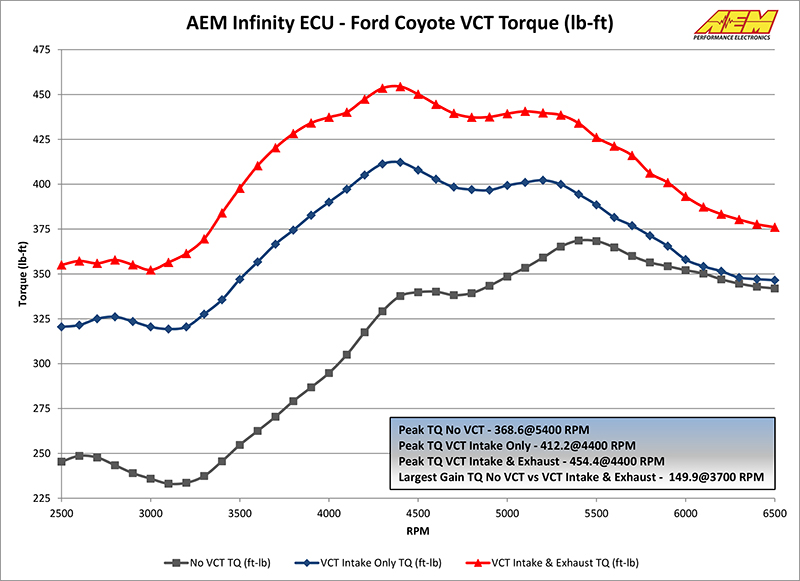 The engine tested was a 100% bone stock take out from a Mustang GT. The power and torque data shown is representative of optimized cam timing and not just sending the cams to their max advance/retard positions. The purpose of the testing AEM did was to show the changes in torque/power output based purely on optimizing airflow by varying both the intake and exhaust cams while maintaining the same AFRs and using the same ignition timing. AEM felt this was prudent as some competitor systems that also have EMS solutions for the Coyote aren’t able to do variable cam control and have attempted to downplay its real benefits. We feel these dyno results pretty clearly show how beneficial the Coyote variable cam system is.

As is shown, AEM first ran the engine with both the intake and exhaust cams at their resting positions (fully retarded for intake and fully advanced for exhaust). Fueling was adjusted to reach target AFR and a base timing value was established. AEM then started tuning the intake cams only and through a series of pulls, found optimized cam advance values that netted the best increases in torque/power output. AEM repeated this same process for the exhaust cams while also moving the intake cams. In each iteration, fueling was adjusted to account for increases in airflow in order to reach our target AFR. This is the typical process for variable cam tuning on any engine.

As you can see, the results are amazing – especially the gains made by retarding the exhaust cams. With a lot of variable cam motors it is typical to see sizable gains by advancing the intake cams. In most cases however, moving the exhaust cams usually nets a decrease in torque output as there is fuel/air charge dilution by the exhaust gases. It’s common that variable exhaust cams are used much like EGR for emissions purposes by the OEMs so it was surprising to see the Coyote make such huge gains by varying the exhaust cams. It is very evident that varying both sets of cams is vital in getting the Coyote to its full power potential!

A Complete Standalone ECU for the Ford 5.0L Coyote Engine

The Infinity ECU combines with the Coyote Plug & Play engine harness adapter to retain full control of the engine’s TI-VCT variable cam timing control and Drive-by-Wire (DBW) system. The Infinity ECU is to our knowledge, the first standalone programmable ECU to deliver full control of all four of the Coyote’s variable valve camshafts and deliver programmable control of the Coyote’s drive-by-wire system. This capability provides tuners with the ability to take full advantage of the engine’s midrange power potential through the adjustment of all four camshafts anywhere in the RPM range, and create two drive-by-wire profiles for rain maps, pit lane limits and more.

The Infinity Coyote adapter harness is compatible with factory sensors and injectors for simplified start up using the supplied base calibration on most applications (may vary based on engine set up and forced induction). AEM’s adapter harness also eliminates the restrictive factory mass airflow sensor (MAF) and airbox, making it an ideal harness solution for forced induction applications. Other key racing features include multiple boost control strategies, programmable nitrous control, on-the-fly map switching, programmable four-wheel speed traction control, launch control, flex fuel and multi fuel capability. It utilizes airflow (VE) based tuning, has up to 64GB data logging capacity and can transfer data at up to 480Mb/second. Its enclosure is sealed and suitable for engine bay mounting.

Educate yourself and learn about the AEM Infinity and VE based tuning with these couple helpful videos from AEM!

Contact us any time with special requests or questions. We are here to support your build and are always happy to share information and help save you $$$. Call 888-290-3213 or contact us by email.

AEM's mission is to design and engineer products that outperform the competition. With over 20 years in the industry, AEM has consistently produced innovative, leading-edge products for the racing community. http://www.aemelectronics.com The air-bypass valve introduced for their air intake systems, the stand alone programmable ecu that utilizes the factory harness, a gauge with a built-in wideband UEGO controller and gauge readout in one unit...these are just a few of the innovative products they've put out into the market. If you are looking for quality, affordable electronics for your vehicle then look no further. Contact Brewed Motorsports for the best pricing on AEM Performance Electronics!